1. Your campaign should be run as a direct-response campaign, not a branding campaign.

The goal is to drive as many investments into your offering as possible. As such, the most important metrics are cost per click, cost per acquisition, and Return on Ad Spend, NOT reach and frequency, which are correlated more closely with branding campaigns. The key is to leverage both interest-based audiences and lookalike audiences to drive traffic to your offering page, and later you can retarget those visitors who didn't invest.

2. Your offering will see spikes at the beginning and end of your offering


A typical offering will see a burst of investments just after launch, and an even bigger burst a few weeks before closing. That’s why it’s crucial to work on marketing your offering in the middle of the campaign. This is where you will drive traffic to your offering page through paid promotion, and then retarget those visitors with a conversion campaign a few weeks before your offer closes.

Below is a chart showing pageview data for the offering page of one of our clients. We generated activity in the middle of the offering by running a traffic campaign on Facebook, and switched to a retargeting campaign during the last 3 weeks, where we saw a huge spike in investments. 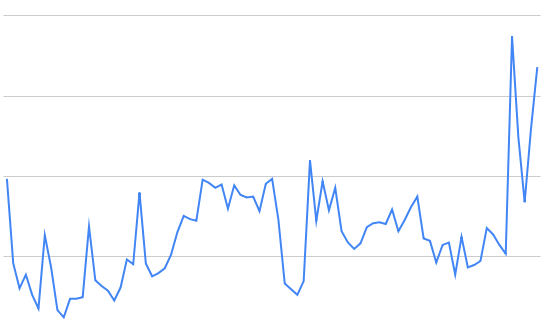 3. Q4 is the most expensive time to market your campaign


Why? Because you’re competing with retailers who rely on holiday shopping for 20-40% of their annual revenue. (National Retail Federation).

Although marketing is more expensive during Q4, two of our most successful clients raised over $1 million with offerings that spanned Q4. So if you need to raise funds, don't let these stats deter you! Just be prepared to spend a bit more on marketing.

Subscribe to get email updates on our equity crowdfunding blog